Mr. Krishna Kumar Yadav , Director Postal services further added that Aadhaar is a proof of Identity recognized by the Government of India . Aadhaar is not a card , but a 12 digit number that will be given to every resident including infants , elderly and even those who don’t have any identify proof . It is issued after using the latest biometric technology , every individual will get his/her own unique Aadhaar number which will be valid across the country . This number will be valid for availing various government and non – government services in future.

Aadhaar enrollment forms are available at Port Blair Head Post Office for enrollment of every individual whom have to bring photo identity proof and proof of address . Biomatric data such as Photograph , Iris scan ( both eyes ) and finger prints( 10 fingers ) will be captured and then a receipt of it will be handed over and Aadhaar number will be later on post to the addressee by Speed Post.

Missing lady traced out by PS Humfrigunj within 48 hours 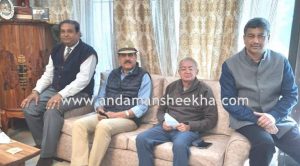