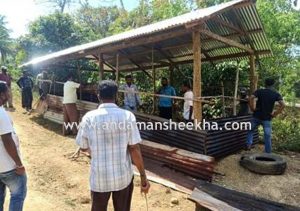 Port Blair, Feb 15: The Revenue Department of South Andaman District carried out eviction drives against encroachments committed over Government land in South Andaman District during the last week of January and during the first two weeks of February and restored an area of 12300 Sq. Mtrs approximately of Government land into Government Khata. As a part of Zero Tolerance towards encroachment, these eviction drives were conducted in various villages of Port Blair and Ferrargunj Tehsil.