Port Blair, Mar 03: The physical classes will be conducted for all the First Year students from 8th March 2021 (Monday) to 17th March, 2021(Wednesday) in M.G. Govt. College, Mayabunder. Even though attendance is not compulsory all the First Year students are advised to attend the physical classes in the college campus, The hostel inmates are advised to reach the college only on 7th march 2021 afternoon or afterwards along with a No Objection Certificate (NOC) in attending classes duly signed by respective parents of the students.
All the students are advised to bring sufficient face masks, sanitizers and other provisional goods. No hostellers will be permitted to leave the hostel from 8th March, 2021 (Monday) to 17th March, 2021(Wednesday) 3.00 PM and they should not leave any of their belongings in the hostel. 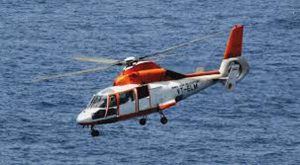 Savita Kumari & Vikramaditya
Port Blair, Mar 02: While almost all remote Islands of this UT have helicopter connectivity for the convenience of public and others, Shaheed Dweep on the other hand, despite being one of the prominent tourism destinations, is still excluded from the helicopter service.
While officials give excuse that there is no demand for such service, residents of Shaheed Dweep say that the demand for such service will be visible only when a schedule for Helicopter Service for Shaheed Dweep will be made public.
“The Helicopter service has been withdrawn from Shaheed Dweep nearly two years back and sadly even after this matter was highlighted by media in several occasions, the service was not restored. People of Shaheed Dweep demand equal treatment and resumption of helicopter service at the earliest,” said Mr. Bimal Roy, former Zilla Parishad Member of Shaheed Dweep.
Meanwhile talking to Andaman Sheekha former Pradhan of Shaheed Dweep Mr. Ramkrishna Biswas said that people are now demanding for such service immediately as Shaheed Dweep is a busy place now, because of the tourism activities.
Residents of Shaheed Dweep are demanding atleast twice a week or once in a week Helicopter Service, so that people in urgent need, especially old people and patients can avail the service.
When contacted a senior officer of Department of Civil Aviation told Andaman Sheekha that the department has not received any such demand and if there is a demand the department will look into the issue.
“Helicopter services can be started to Shaheed Dweep if there is a request from there, after following requisite protocols. They can give request to the department that they wish to avail the services. I have not received any such request from the villagers,” the senior officer added. 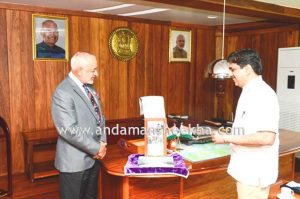 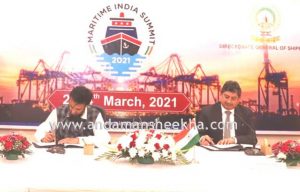 Port Blair, Mar 02: For the first time in history, under the initiatives of National Union of Seafarers of India (NUSI), six MoU have been signed with Mr. Amitabh Kumar, Director General of Shipping which will be an important part of the Maritime India Summit.
The efforts and initiatives of NUSI as a trade union is highly appreciated in the field of welfare, training, medical, education and nation building.
As per details available here following six items have been covered under the MOU Financial Assistance for Covid-19 Vaccination to all ranks of seafarers; Sponsorship to seafarers/family for studying at the Indian Chapter of World Maritime University, Sweden; Investments in Training including Skill Enhancement course at zero cost to seafarers; Financial Medical Assistance to seafarers and their families; Financial Educational Assistance to serving seafarers and their families and Financial Educational Assistance to retired, deceased seafarers and their families.
The six MoU are upto a tune of Rs. 225 Crores (Rs. Two Hundred and Twenty Five Crores). It is a great achievement of the initiatives of NUSI as a trade union with the support of the shipping companies for the benefit of seafarers and their families throughout India in particular and the shipping industry in general.
The overall encouragement of the maritime administration and the Ministry of Shipping is much appreciated. 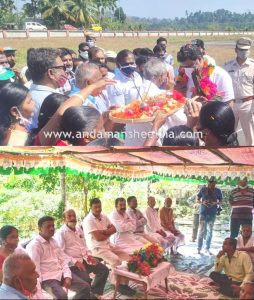 Savita Kumari
Diglipur, March 03: Mr. Kuldeep Rai Sharma, the Member of Parliament reached Diglipur this morning, for a two day visit. On his arrival the villagers accorded a warm welcome.
According to Mr. Prashanta Hira, President Block Congress Committee, Mr. Sharma attended a few meetings with public and youths of Diglipur in the morning. Later, at 11 AM he visited Aerial Bay area and interacted with the members of Tourist Boat Association and villagers.
“Since afternoon till night he held several other grassroot level meetings at VS Pally, Hathi Level, Milan Grams and Rabindrapalli,” Mr. Hira added.

Port Blair, Mar 02: The Communist Party of India (Marxist) has decided to contest the forthcoming Panchayat-raj and Municipal elections throughout the islands. A decision to this effect was taken by the party in its Andaman and Nicobar State Organising Committee meeting held at Shaheed Bhavan, Anarkali, Port Blair today. The meeting of the party has also decided to take up various issues of the islanders with the authorities concerned.
In a resolution adopted in the meeting, CPI (M) has condemned the restrictions imposed on the democratic rights of the people in the islands by the BJP-led central government and bureaucratic-run Administration. The meeting noted that the authorities are denying permission to hold public meetings, corner meetings, mass dharna or any kind of public gathering by the political parties, trade unions, service associations, youth and student organizations, etc. Through another resolution the CPI (M) has demanded Covid -19 vaccination for the entire islanders on free of cost basis and to announce the schedule of vaccination. The CPI (M) has condemned the abolition of the Block level Panchayat Samities in the 3-tier Panchayat-raj by the BJP-led central government without any reason and demanded its restoration. CPI (M) through another resolution demanded to halt the on-going privatization of the Electricity Department and urged the central government to keep the power sector in government control in the islands. CPI (M) has also demanded to take effective steps by the central government to create jobs both in government as well as private sector for the local youths considering the growing unemployment among the educated youths in the islands. Though another resolution, the CPI (M) has demanded to fill up all the vacant posts in the Andaman and Nicobar Administration as thousands of posts are lying vacant for the last several years.
Earlier, addressing the State Organising Committee meeting and the General Body meeting in the evening, Mr. G. Ramakrishnan, Polit Bureau Member of the CPI (M), who arrived Port Blair yesterday, said that the economy of the country is crumbling while the BJP-led central government is appeasing the corporate sector by extending benefits to the tune of thousands of crores, even during the pandemic. He said that the Modi government has failed in all fields and only with the media hype it is surviving. He further said that during the lockdown period, a number of anti-people and anti-working class decisions have been taken by the government besides passing legislations to curb the rights of workers and farmers.
Mr. KG Das, Secretary, A & N State Organising Committee presented the report of the activities of the party in the islands and the situation in the islands during the Covid -19 pandemic. Mr. D. Lakshman Rao, State Secretariat Member presided over the meeting.

The Protection Officer (Non Institutional Care) informed the gathering in detail about Adoption through a Power Point Presentation that all adoptions should be registered on ‘Child Adoption Resource Information and Guidance System’ of Central Adoption Resource Authority (CARA).

The procedures involved in Adoption and Do’s & Don’ts were also explained. The team also sensitizes the gathering on Child Protection and various structures & systems available to protect the rights of the children.

The program was concluded with an interactive session, wherein querries raised by the participants were clarified.

Port Blair, Mar 02: On the second day of on-going Annual Training Camp of 1 (A&N) Indep Inf Coy NCC Port Blair in which 99 Cadets are participating under the agies of Commanding Officer Lt Col A Vivekananda, various lectures on forthcoming ‘B’ & ‘C’ certificate exams were conducted, apart from it classes of Personal Health& Hygiene, Personality development and disaster management were taught. All Cadets being prepared for firing on 03 Mar. Cadets are given first hand training to handle rifle and practised different firing positions.
All Cadets underwent the drill & marching practice which will be tested during their certificate exams. Senior JCO Sub Sreenivasa V briefed about Map reading procedure and importance/ implementation of Map reading in Army.