Vikramaditya
Port Blair, Jan 11: A team of Andaman and Nicobar Police has arrested an accused from Kolkata on the charges kidnapping a minor girl from Andaman and Nicobar Islands.
According to details the accused allegedly lured the minor girl and took her to Kolkata after which the parents of the minor girl lodged a complaint in nearby police station in this regard. Following this, a team was formed to trace the accused and the team soon arrested the accused from Kolkata and brought him to Port Blair yesterday. It is learnt that from court, the accused has been sent to Judicial Custody.
As per details, Sub Inspector Anish Ibrahim, headed the team, which comprised of ASI Jagdish and HC T Usman.

John Wilbert & Vikramaditya
Port Blair, Jan 04: Andaman and Nicobar Police arrested a resident of Shoal Bay today for allegedly raping wife of his friend yesterday.
As per sources, the accused, Mr. Bansal Halder, 46 year, went to his friend’s house in another village yesterday to consume alcohol and after consuming alcohol he allegedly raped his friend’s wife.
A complaint in this regard was later registered at PS Ograbraj and taking swift action the investigating team under the leadership of SHO PS Ograbraj and other senior officers, arrested the accused. The accused was later produced to court today, from where he was sent to Judicial Custody. Further details are awaited. The swift action of Andaman and Nicobar Police in this case is appreciated.

Trinath & Vikramaditya
Port Blair, Dec 16: First time in the history of Andaman & Nicobar Islands, speedy trial of case under POCSO Act was concluded within a short span of time. On 16 December 2020, Shri. Jimut Bahan Biswas, Hon’ble Additional District & Sessions Judge -cum Special Judge under POCSO Act, Mayabunder convicted one accused namely Biplab Pal, a private labour of Rangat, originally from West Bengal and sentenced him to undergo imprisonment for five years, for the offence punishable under section 10 of POCSO Act and also to pay fine of Rs. 50,000/- (Rupees Fifty Thousand), in default of payment which he will have to undergo R.I for three months more.
This POCSO case was matured before the Rangat PS on the basis of the recorded statement of the mother of the victim dated 23 November 2020.
The IO, SI V. Satyavati and Inspector Pritam Behari, the Case Chargesheet filing officer, rendered their outstanding service to find out all the clues of the case and filled the charge sheet of the case within a very short period.
Subsequently, after completion of investigation, I.O / SI Satyawathi of PS Rangat submitted charge-sheet on 08 December 2020 against the accused person before Hon’ble Court and thereafter charges were framed against the accused on 11 December 2020.
The accused had sexually abused a minor girl of seven years.
As per provision u/s 357A read with section 33 (8) of POCSO Act and rule 7 of POCSO rule, Hon’ble Special Court has awarded compensation of Rs. 4,00,000/- (rupees four lakhs) to the victim child which will be paid by Government from Government fund as provided 7(4) of POCSO rule. The speedy trial of this case was conducted by Shri. Keshab Ch. Mandal, Learned Special Public Prosecutor from prosecution side. 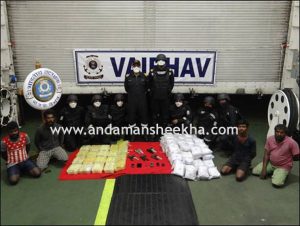 Tamil Nadu Coast, Nov 25: In the past two years Anti-National Elements involved in narcotics smuggling are trying to infiltrate narcotic drug (Heroin) through Indian coast. ICG received credible information from intelligence agencies regarding an illegal consignment of narcotic drugs (Heroin) going to be smuggled in India through sea route. The information further revealed that the consignment is being transhipped through a Sri Lankan boat. Indian Coast Guard deployed five ships for the operation to apprehend the smugglers and seized the contraband.
ICG ships carried out extensive search for the suspected boat in the most probable area as per the intelligence input. Two ICG aircraft were also continuously deployed to augment sea-air coordinated search. Post extensive well planned search in the area, extending since 17 Nov 2020, suspicious Sri Lankan boat was identified south of Thoothukudi on 24 Nov 20. ICGS Vaibhav stealthily followed the boat, and carried out boarding at the opportune moment at about 10 NM off Kanyakumari in the evening of 24 Nov 20. Search of the suspicious boat revealed 99 packets of heroin, 20 boxes of synthetic drugs, five 9 mm pistols and a thuraya satellite phone set. The drugs and weapons were unearthed since hidden in an unapproachable location in the boat. During initial questioning, the crew members revealed that the drugs were transferred onto Sri Lankan vessel ‘Shenaya Duwa’ on the high seas by a Pakistani dhow from Karachi. The drugs meant to be sent to western countries and Australia. The joint interrogation of the apprehended 06 crew members will be undertaken on vessel reaching Tuticorin. Indian Coast Guard is committed to thwart any attempt to smuggle contraband, drug and weapon into our country.

Sarthak Kanjilall
Diglipur, November 25: On a Following tip-off, a team of Diglipur Police Unit headed by Sub-Inspector Manoj Lall along with PC Krishna Kumar and LPC Rubi raided the house of Bittaranjan Das at Kalipur yesterday and seized a carton of Indian Made Foreign Liquor.
As per the sources, a huge quantity of Hundia was also seized from the spot. It is learned that cash amounting to thousand was recovered from the spot which the bootlegger received by selling his liquor. A relevant case was registered against the accused.

Trinath
Port Blair, Nov 24: Yesterday a POCSO case was registered at PS Rangat, Middle Andaman. As per detail on complaints of the parents that a 28 year old youth of Rampur area harassed a minor girl, the arrest was made.
Following complaints, the SHO reportedly formed a team under the guidance of SDPO, Rangat and close supervision of SP, N & M Andaman.
The accused was apprehended by the police team within few hours and the accused reportedly also confessed his guilt. After due medical examination the accused have been produced today before the CJM Court at Mayabunder and from there the accused was sent for14 day judicial custody. 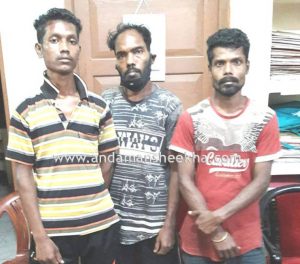 Port Blair, Nov 24: On 23/11/2020 at about 1230 hrs, the team of AFEVS unit consisting of Mr S P Roy Dy. Ranger, Mr Baiju M Nair Forester, Mr M Shabbir forest guard, Mr Basant Lall forest guard along with six mazdoors on a tip off went to Parnashala RF area, under Parnashala Panchayat & Range jurisdiction of Rangat & following the foot prints & some other identification marks which indicates illegal trespass into the RF by some unknown persons & the team hided in the RF to trap the suspected accused & about 1900 hrs the team detected four suspected persons carrying some cloth bags coming out of the reserved forest and the forest officials chased them & get hold of two suspects, out of four as other two of the suspects manage to flee from the spot taking the advantage of darkness and after a massive search of two hours one out of other two absconding suspect was able to traced out & the other suspect could not be traced out & as such three accused were arrested & brought to the Range office AFEVS unit alongwith the seized material (meat of barking deer).

On further investigation/interrogation the names of the three arrested accused were disclosed as Mr. Dinesh Poddar, Mr. Shankar Ram and Mr. Sudhir Indwar, all resident of Parnashala village. Further they reveals that alongwith them other one person also went inside the RF at 0600 hrs on 23.11.2020 and the name of fourth absconding Co-accused was disclosed as Ram Mondal also a resident of Parnashala village and they hunted a barking deer, dressed & cut into pieces in the forest and put it in the cloth bags to carry. The weight of the venison recorded as 12 Kilograms by the investigating team.

Trespass into the Reserved forest without permission/valid documents is a punishable offence U/s 26 (1) (d) (i) of Indian Forest Act 1927 with imprisonment for a term which may extend to six months or with fine which may extend to five hundred rupees, or with both, in addition to such compensation for damage done to the forest.