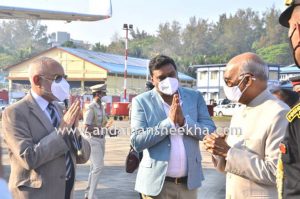 Amit, John & Savita Kumari
Port Blair, Mar 01: In yet another road accident, a man died on the spot after being overrun by a bus of State Transport Service. As per details the accident took place near Collinpur Jarawa post this morning at about 07:10 AM.
According to the sources the man, working as DRM, was going for duty at Temple Myo site office, APWD. The bus, carrying mostly school students ,was coming from Tirur to Port Blair.
It was learnt that immediately the bike rider namely Raj Kumar Roy, son of Rama Krishna Roy, age 37 years, a resident of Tirur was shifted to PHC Tushnabad, where he was declared dead by the doctor. A case was registered against the driver of the Bus, it is learnt. Police is conducting further inquiry in this regard.

Port Blair Mar 01: The Mortuary Van of Panchayat Samity Mayabunder is out of service since last four to five months, causing great deal of hardship for people of the region, in case of any death in family.

In a letter addressed to the Deputy Commissioner North and Middle Andaman, former Pramukh of Mayabunder Panchayat Samity, Mr Abdul Siddique pointed out that the reason behind the unavailability of the Mortuary Van is unknown and because of this, family members of the deceased person are forced to hire private vehicles on high rate.

“Considering the need of Mortuary Van for Mayabunder region, the intervention of the administration is required,” he added.

Mr. Abdul Siddique requested the Deputy Commissioner of North and Middle Andaman to sort out this issue for the larger interest of people of the region. 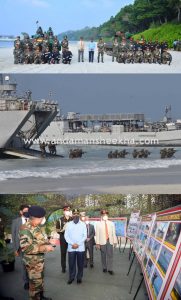 Vikramaditya
Port Blair, Feb 28: The President of India, Mr. Ram Nath Kovind today witnessed an operational demonstration by Andaman Nicobar Command at Swaraj Dweep Island, on the third day of his four day visit to Andaman and Nicobar Islands.
The President of India, Mr. Ram Nath Kovind earlier arrived Port Blair, the capital of Andaman and Nicobar Islands, on 26. February 2021, for a four days visit.
He is accompanied by the First Lady Mrs. Savita Kovind.
As per detail, today the President of India was briefed by Commander-in-Chief Andaman and Nicobar Command (CINCAN) Lieutenant General Manoj Pande on the operational capabilities and state of readiness of the Command at Radhanagar Beach of Swaraj Dweep Island at 6:50 AM.
Later from 7.00 AM to 8.00 AM the President witnessed multi-dimensional operational capabilities of the Command, including an amphibious landing by Integral combat platforms and forces of the Andaman and Nicobar Command (ANC)
During the one hour Combat Free Fall (CFF) & helocasting by MARCOS, Special Heliborne Operations (SHBO) by Ghatak Platoon, Naval Gun Fire Support (NGFS), Counter Surface Force Operations (CSFO), Search and Rescue (SAR) operations and vertical replenishment at sea were also demonstrated by ANC.

Port Blair, Feb 28: Cadets of National Cadet Corps have always brought laurels for Andaman and Nicobar Islands in different occasions but their output largely depends upon the exposure and opportunity they get during their NCC training days.
Cadets of Andaman and Nicobar Islands, who are currently enrolled in NCC are perhaps very lucky as they are presently having a dynamic officer as their Commanding Officer, who is leaving no stone unturned to provide the best opportunities and exposures for the cadets of these Islands.
Captain Vijay Kumar Trivedi, the Commanding Officer of 1(AN), NU NCC, Junglighat, Port Blair, is a highly decorated officer of Indian Navy and has a vast experience on leading troops.
During his Indian naval service, he bagged three highly prestigious medals namely Operation Vijay, Operation Parakram & Operation Pawan.
This is only because of his leadership, this year Andaman and Nicobar NCC Unit received DG’s letter of commendation and appreciation for excellent activities performed during pandemic of COVID-19.
Captain V K Trivedi and his team conducted many events throughout the year to keep cadets busy in constructive activities and promote leadership qualities among them. The NCC unit promoted and conducted activities like Sea Acquaintance of Naval NCCC Cadets at Naval Jetty, Seminars on Sea Awareness, Constitution Day, Blood Donation (all at JNRM), Swachchta Abhiyan and Covid-19 Awareness at NCC adopted village Namunaghar, Traffic awareness week and traffic awareness with demo at tri-cross near Govt. Girls Sr. Sec School, with the help of Traffic Police personnel.
Last but not least, successfully conducted ATC 2020-21 at Govt. Middle School, Haddo from 22nd Feb’21 to 26th Feb’21.
Not only this, Captain V K Trivedi is also trying to get firing simulator for cadets, first of its kind for Naval NCC in these Islands.
Capt Trivedi’s hard work, dedication and honesty are the characters that have helped him to prove himself. He has a zest for taking NCC of the Islands to sublimity. His commendable qualities have not only boosted the morale of NCC cadets but he’s popular among his staffs too. (Courtesy: S.Lt (AMO) Dr. Satyam Setia) 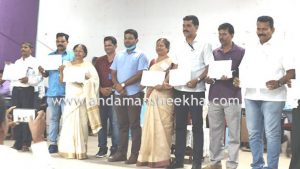 Vikramaditya
Port Blair, Feb 28: The results of CCS Ltd. Managing Committee were announced today after completion of counting of votes. As per details , all the Congress supported candidates were elected.
Returning officer V K Jindal thanked all the department & candidates for their support for peaceful elections.
The counting of votes for Consumer Co-operative Society Limited’s Managing Committee was carried out at GGSSS, Port Blair.

He also witnessed Light & Sound Show at Cellular Jail, which depicts India’s struggle for Independence and also Andaman’s role in this struggle.

“The heroes of our freedom struggle endured inhuman torture during their incarceration in the solitary cells of the jail. They epitomized courage, fearlessness, and supreme sacrifice. I salute the memory of those great freedom fighters,” a message posted by President of India’s official twitter handle said this evening.
Tomorrow, the President will depart for Swaraj Dweep Island of South Andaman in the morning, which is known for its natural beauty.

On Feb. 28, the President will be briefed and updated on ANC activities at Radhanagar Beach of Swaraj Dweep.

He will also witness the operational demonstration planned by Andaman Nicobar Command. On completion of the visit, on March 1, the President will depart for New Delhi in the evening.

Gracy Tripathy & Vikramaditya
Port Blair, Feb 26: The NHIDCL had earlier set a target to complete the repair works for Jirkatang to Middle Strait ATR stretch to March 15,2021 but now because of the delay in ATR repair works in Kadamtala Jarawa area this deadline has been changed to March 31, 2021.
Talking to Andaman Sheekha, a senior officer of NHIDCL today mentioned that the contractors were earlier asked to complete the work by March 15 but that is not possible now. He assured that by March 31, 2021 the work will be completed.
Earlier in the first week of February NHIDCL had told Andaman Sheekha Daily that the deadline for completing this work is February 25,2021.
In the beginning, NHIDCL was not given permission to construct proper road inside the Jarawa Tribal Reserve and hence they had to lay only a 40 mm of surface over the existing road surface.
The NHIDCL had already laid one layer earlier and now the work for the second layer of road along with remaining road works on some patches will have to be completed.
In 2016 and 2017, Islanders had seen that said stretch of road was in most horrible shape, later the NHIDCL up-graded the road stretch by laying a 40 mm road surface over the old road surface.
Sadly the newly upgraded stretch has now developed thousands of potholes and in many parts the road surface has gone missing. 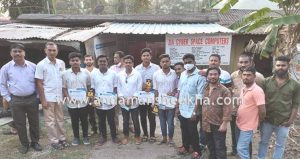 Venkat
Port Blair, Feb 26: Today Mr. Ration Rasheed, an well known social worker, met those who youths of Bambooflat, who had exhibited tremendous amount of honesty by handing over a golden bracelet to police, after finding the same from passenger sitting area of MV Mus.
Mr. Ration Rasheed handed over certificate of appreciation to the Bambooflat youths and lauded their honesty.
He urged the youths to continue in the path of honesty and set an example for others to follow, with their good deeds. 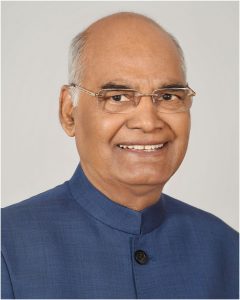 Port Blair, Feb 25: A warm welcome awaits the President of India, Mr. Ram Nath Kovind who will be arriving here on a four-day visit to A&N Islands tomorrow. He will be accompanied by the First Lady Shrimati Savita Kovind.

Later in the evening, the President will visit the National Memorial Cellular Jail and lay wreath at the Martyrs’ Column and visit the Jail Complex and Museum. He will also witness Light & Sound Show at Cellular Jail.

He will also witness the operational demonstration planned by Andaman Nicobar Command. The President will also Radhanagar Beach.

On completion of the visit, on March 1, the President will depart for New Delhi in the evening.