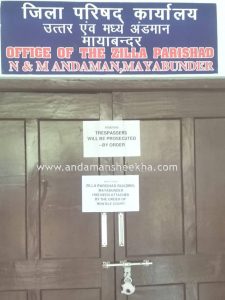 Staff Correspondent
Mayabunder, Feb 11: An execution case being Money Execution Case No. 01 of 2019 has been registered before the Court of Hon’ble Additional District Judge, Mayabunder, arising out of Arbitration Case No. 01 of 2016 and solemn order dated 30th November, 2015 of Hon’ble High Court.
The Decree Holder claimed the awarded amount of total Rs. 26,12,727/- with interest but it was observed in the said execution case by the Hon’ble Court that the judgment debtor/ Chief Executive Officer, Zilla Parishad, North & Middle Andaman, Mayabunder was always in the habit of delaying the execution proceeding by preferring various vexatious applications and it was also crystal clear that said Chief Executive Officer, Zilla Parishad also holding the charge of Assistant Commissioner (H.Q), Mayabunder was always habit of disobeying the order of the Hon’ble Court and as such the decree holder could not get the fruits of the decree awarded by Hon’ble Court.
Finally, in compliance of order of Hon’ble Court, the Bailiff of the Court with the assistance of police of Police Station Mayabunder has attached the entire Zilla Parishad Building, Mayabunder on 11th February, 2021 and took custody of the said building as an Attaching Officer till further order of Hon’ble Court.
It is also learnt that the writ of auction will be considered after submission of report by the Bailiff of the Court.

Mayabunder, Feb 11: In a case of aggravated penetrative sexual assault of an innocent minor minor girl of just seven years by the wrongdoers, in 2019, the matter was brought before the temple of justice for redress by the mother of the victim girl.
The case was started on 07th July, 2019 at Police Station Diglipur on the basis of complaint lodged by the mother of victim girl.
The prosecution has sufficiently proved that the accused persons committed the offence of aggravated sexual assault under section 10 of POCSO Act.
Accordingly, Shri. Jimut Bahan Biswas, Additional Sessions Judge -cum- Special Judge under POCSO Act, North & Middle Andaman, Mayabunder has convicted the accused persons namely Shankar Biswas and Ajit Kumar Mondal, both are residents of Khudirampur under PS Diglipur and sentenced to undergo rigorous imprisonment for five years each for the offence punishable under section 10 of POCSO Act and also to pay fine of Rs.50,000/ (rupees fifty thousand) each, in default of payment which they will have to undergo rigorous imprisonment for three months more. For the rehabilitation of victim girl, an amount of Rs.4,00,000/- (rupees four lakhs) has been awarded as compensation as per provision u/sec. 357A read with section 33 (8) of POCSO Act which will be paid by the Government from Government fund as provided under 7(4) of POCSO rule.
The prosecution case was conducted by Shri. Keshab Ch. Mondal, Learned Special Public Prosecutor (POCSO Act).

Trinath
Port Blair, Jan 12: In remembrance of Swami Vivekananda and celebration of National Youth Day the teachers, students and citizens of Billyground area organized a rally from Harinagar Panchayat Bhavan to Billyground Fish market, today early in the morning. The most attracting part of the railly was that all students were wearing Swamiji’s turban.
The whole program was organised by Mr. Suresh Chandara Majumder, Principal, Govt. Sr. Sec School Swadeshnagar. After the rally, the Principal Mr. Mazumder delivered an inspirational and patriotic speech on the life of Swamiji. He also highlighted on the importance of the National Youth Day and how much it is necessary in the present context.

Sarthak Kanjilall
Diglipur, November 25: On a Following tip-off, a team of Diglipur Police Unit headed by Sub-Inspector Manoj Lall along with PC Krishna Kumar and LPC Rubi raided the house of Bittaranjan Das at Kalipur yesterday and seized a carton of Indian Made Foreign Liquor.
As per the sources, a huge quantity of Hundia was also seized from the spot. It is learned that cash amounting to thousand was recovered from the spot which the bootlegger received by selling his liquor. A relevant case was registered against the accused.

Residents of the region are demanding the administration to restore the ship services, as it was before the lockdown period.

According to the Ex-Pradhan, Pahelgaon, Mr. Shivananda Bairagi, after he highlighted the problems to the authorities, ship MV Coral Queen, was sent in the region a week ago.

“Hundreds of residents of North and Middle Andaman have different urgent works related revenue, health, studies etc at Port Blair, Shaheed Dweep and Swaraj Dweep. The STS buses take hardly 20 passengers as a result of which many remote Islanders of North and Middle Andaman have no option rather than paying Rs 2000 or above per head to travel till Port Blair in four-wheelers,” said Mr. Bairagi.

Less number of buses and ships not only means problems for public but also huge economic losses for people of North and Middle Andaman. As the entire world is learning to live with the COVID-19 virus, by following all COVID-19 protocol, the Administration should also focus on implementing these guidelines strictly, instead of restricting movement of public. 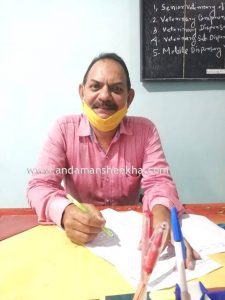 Trianth
Billyground, November 08: Although the pandemic paused everything in the entire Andaman and Nicobar Islands, it didn’t stop the Veterinary Unit of Swadeshnagar to continue its good services for the welfare of general public.

The Agriculture farmers from Basantipur, Harinagar, Swadeshnagar, Sivapuram till Panchwati were catered at all times on requests by the unit, which has been highly appreciated by the farmers. “The unit never delayed responding,” said a farmer. 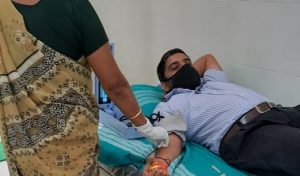 Owing to the present pandemic situation, blood donation volunteers were hesitant to come to the hospital due to which it was becoming impossible to arrange sufficient blood for the patient who needed the blood immediately.

Having no other options, Dr. Suriya Kant Singh immediately came forward and donated blood to the patient. This humanistic approach of Dr. Singh proved that as and when required the doctors themselves can step forward to save a life.

The parents of the patient expressed their heartfelt gratitude towards Dr Singh. The Pradhan and other PRI members as well as public of the region highly appreciated the immediate response given by Dr S. K.Singh. 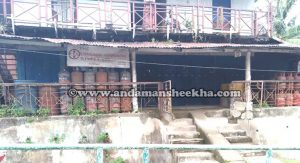 Ganesh & Gracy Tripathy
Baratang, September 10: Amidst the current state of the pandemic, essential supplies are in the utmost importance for the Islanders but due to various restrictions and limitations for more than two months, no LPG cylinders were made available for people of Khari Basti and Nilambur areas of Baratang Island, Middle Andaman.
On September 7th, CCS issued LPG cylinders in Krishna Nagar and Oralkatcha in the midnight without any information about the distribution, because of which senior citizens, alongwith the people, who are not residing at the roadside were not able to get LPG Cylinders.
The next day when people reached the CCS unit of Baratang to get LPG cylinders, it was informed by the CCS manager that, no cylinders are available and the stock will be arriving after two days. But even today no cylinders were provided for the residents of Baratang region, which left many residents fuming.
When Andaman Sheekha contacted Mr.R.P.Singh, Secretary, CCS he said that the LPG cylinders were already shipped but due to bad road conditions, the vehicle suffered brake-down on ATR, which resulted in this delay.
Mr.Singh assured the public through Andaman Sheekha that above three hundred LPG cylinders will be delivered tomorrow at Baratang region which will be sufficient for the people of the area.

Ganesh
Baratang, Sept 10: Three people have been tested COVID19 positive in Baratang Island and all three are said to be members of Nicobari Tribal Community, posted at Baratang. The first case was detected two days back through RT-PCR test and while tracing the contacts two others were found COVID19 positive through Rapid Antigen Test. One person who reportedly complained uneasiness was reportedly shifted to Port Blair today while other two patients are in home isolation, it is learnt. Further details are awaited.

Besides this, the Medical team very categorically, explained the villagers and patients who were present on the occasion about the need and importance of maintaining physical distance, wearing mask and gloves and regular sanitization of hands and floors. The team also stressed on regular practicing of Yoga. Miss Bina performed yoga and inspired the villagers to adopt yoga in their daily life and spoke on the importance of yoga as well. The medical team provided immune booster medicines among the participants to fight against the COVID infection.

It was also learned that, Dr.Angel Bhati Chauhan ,Deputy Commissioner advised all the medical authority to conduct such health camps in their respective areas to spread awareness among the public against the pandemic. Dr.Chauhan , personally visited Rangat region and visited the CHC Rangat and observed the situation of the hospital. She personally spoke with the doctors and gathered updates on the situation of the hospital. She advised the CMO address her about any shortcomings faced by the the hospital.