John Wilbert
Port Blair, Feb 01: A POCSO case was registered against a resident of Makachua village of Great Nicobar. As per details a minor girl with her infant baby had come to PHC Campbell Bay for treatment, when doctors detected that mother of the baby is a minor girl, nearly 14 year old.
On this the matter was reported to police and soon the accused, 33 years was arrested. The minor had girl reportedly delivered the baby at her home. 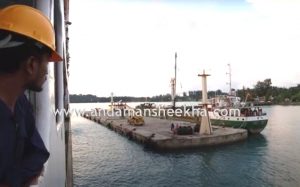 Rahul Singh & Vikramaditya
Great Nicobar, Jan 22: The Great Nicobar Island is already facing the brunt of strike being called by Private truck and van operators at Port Blair, as there is already a shortage of Tomatoes, Onions and Potatoes in Great Nicobar Island.
Andaman Sheekha Daily had already anticipated this problem and reported about this issue a few days back.
The Small Trader Association of Campbell Bay has already expressed serious concerns on this issue earlier.
As per reports residents of Great Nicobar are not able to find Tomatoes, Onions and Potatoes and some other essential items at Campbell Bay Bazaar easily, which has triggered a sense of panic among many.
Meanwhile, it is learnt that there are probabilities that the strike of Private truck and van operators will be called of tomorrow but even though it will not solve problems of Great Nicobar Island immediately.
As per detail, the next schedule of ship for Campbell Bay is on 31 Jan 2021 and till then it will difficult to people to manage kitchen at Great Nicobar. Residents of Great Nicobar are now requesting the Administration to make some alternate arrangements to send Tomatoes, Onions and Potatoes and other essential items to Great Nicobar. 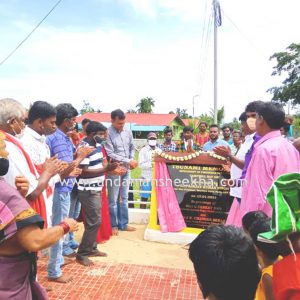 Campbell Bay, Jan 18: On the occasion of Pongal, a Tsunami Memorial was inaugurated at Fisherman colony Campbell Bay in the memory of the people, who lost their lives in the disaster on 26 Dec 2004.

The memorial consist of the list of all person names who lost their lives in Tsunami and the other hand the name of the first settlers of fisherman colony who came to the Great Nicobar Island.

While talking to Andaman Sheekha Mr. G Venkat Rao Ex Pramukh said Tsunami Memorial is inaugurated after the 16 years of Tsunami, because “still the wounds of the Disaster is present in our hearts and the memory of our people is still alive in our hearts and this memorial will also remind us of this people and the struggles of our people to rebuild our lives and families”.

Katchal, November 23: Agitation continued in Katchal Island even today for not providing the 242 Sri Lankan Tamil settler families of Katchal Island,a resettlement package. Tomorrow will be seventh day of Protest and second day of relay-hunger strike. Three protestors sat in the relay hunger strike today while hundreds of other protestors stood for support.

“We do not have any clue about the present status of our resettlement from Tribal area to non-Tribal area. Until and unless we get a deadline from the administration that how long it will take to resettle us from Katchal Island to South Andaman, we will continue the protest,” said Mr. Lawrence George Thomas, the Joint Secretary of Katchal Settlers’ Welfare Association.

Mr. Lawrence George Thomas added that since 25 years, the small community is fighting for resettlement.

“Lots of hope given by administration but nothing is getting converted into reality hence frustration and anguish brewing among our community people. We do not have any clarity about our future, and we are living in 50 years old quarters, which are in dilapidated conditions without toilet facilities,” he added.

“We are in a DO or DIE situation, we can’t wait anymore, until and unless our demands are fulfilled we will continue the protest,” Mr. Thomas finally added.

Port Blair, Nov 23: The Tribal Development Council, A & N Islands has requested the Administration for Immediate shifting or relocation of 47 original families of Sri Lankan Tamil Settlers and their descendants from Tribal area to non-Tribal area on Katchal Island as that, according TDC, is severely affecting the traditional life and culture of tribal of Katchal Island.

In a letter e-mailed to the Chief Secretary of Andaman and Nicobar Administration, the State Chairman, TDC, Mr. Rashid Yusoof claimed that there is a huge threat to the culture and traditional life of the Nicobarese tribes on Katchal Island.

In his letter, which is also shared with Andaman Sheekha by TDC, he said that this threat comes from the 47 repatriate families who were brought from Sri Lanka in the 1970s and settled on Katchal Island, Nancowrie Tehsil, Nicobar District.  Today they number 240 families.

Mr. Rashid Yusoof added in his letter that the Nicobarese have very low levels of education, and highly innocent by nature. At the time of the Tamil Sri Lankan settlement, the Nicobarese were also not aware of the prevailing law and Andaman and Nicobar Protection of Aboriginal Tribes Regulation (ANPATR 1956).

“The Katchal Tribal Council has made several requests to shift these non-tribal families to any other revenue villages/Islands. The Tsunami of 2004 had devastated much of tribal villages on West coast Katchal, where the majority of the tribal population had died. The surviving Nicobarese were shifted to Mildera Village in Katchal alongside the Sri Lankan repatriate families. Adjusting to the living style and values of non-tribals is very annoying and a great hindrance in the day to day life of tribal and culture. In this regard, the Tribal Council has had several correspondences with the UT Administration to relocate the Sri Lankan families from tribal area to non-tribal area. Accordingly, in 2003, NDA Govt. took the decision to shift the settlers to non-tribal area through a special package. But their shifting process is being delayed which may kindly be expedited,” Mr. Rashid Yusoof added.

He further pointed out that besides action by the Tribal council, the Katchal Settlers Association (representing the Sri Lankan repatriate families) as well as the then local Member of Parliament, A&N Islands, had made several correspondences from time to time with the UT Administration and Govt. of India as well for their shifting to Non-Tribal area.

“It also learnt that even the  direction from the Hon’ble High Court Judgment in the year 2012 for their shifting within 6 months through a special shifting package but still require implementation. The UT Administration must take immediate action in shifting/resettlement of the above-mentioned settlers as this is very sensitive issue for the tribal.   The re-settlement of these repatriate families is also a violation of the ANPATR of 1956 which is a serious threat to the tribal cultures and their traditional life, unless the existing repatriate families who occupy a major portion of land given by the govt. are not vacated immediately through a special shifting package,” Mr. Rashid Yusoof added in his letter. 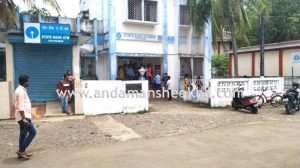 Vikramaditya
Car Nicobar, Oct 09: Car Nicobar Island, the headquarter of Nicobar District has three ATMs but out of which only one ATM of State Bank of India (SBI) was functional since nearly one month.
While out of two ATMs of SBI, one ATM was repaired recently after Andaman Sheekha report the ATM of Cooperative Bank is non-functional since last nearly one year.
Sadly nearly one week back the lone operational ATM of SBI has also become non-operational, leaving general public of the Islands, especially government servant in deep trouble.
Due to restriction in movement of ships, many people are stranded in Car Nicobar and shortage of cash is a serious problem for them.
In Car Nicobar at present one has to stand in long queue inside SBI bank with cheque to withdraw cash, which is a risky affair during the time of pendemic. People of the Island are now demanding immediate repair of both the ATMs of SBI and one ATM of Cooperative bank so that they can also reap the benefit of Prime Minister Digital Indian Mission. 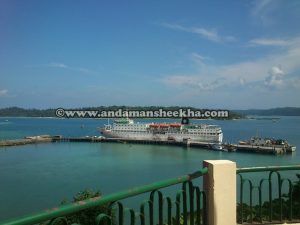 Gracy Tripathi
Port Blair, August 26: As per sources, M V Coral Queen is scheduled to sail for Campbell Bay tomorrow at around 1300 hrs and will be returning back via Nancowry and Hutbay.
Considering the fact that this is not a normal passenger sailing, there is a very little chance that those stranded in the Southern group of Islands due to lockdown will be able to avail this voyage.
Many who are stranded in different remote islands of Nicobar group have no other way to reach Port Blair in the absence of normal helicopter service.
Many stranded passengers of Nicobar District called Andaman Sheekha and informed that sailing of MV Coral Queen appears to be a golden opportunity for them, especially those who are seriously in need of expert medical care and those who are stranded due to the expiration of Tribal pass.
On this issue when Andaman Sheekha contacted the Assistant Commissioner Nicobar,

He informed that Deputy Commissioner, Nicobar had a meeting today with the Tribal Council concerning the issue.
“It was discussed that the Nicobar administration with the help of Tribal Council will be taking an initiative to help the stranded people reach back their respective places through the transportation modes available, alongside with Covid-19 testing procedure as well, by the end of this month”.
Although it appears that stranded people in Nicobar District might not be getting a chance in MV Coral Queen’s sailing but the good part is that the Nicobar Administration is aware of this problem and are putting efforts to find a solution.

Campbell Bay, Aug 23: A serious COVID19 patient of Campbell Bay area was evacuated to Port Blair today by a Coast Guard helicopter, after his conditions deteriorated despite oxygen support since yesterday night.

As per report the patient is a medical staff of PHC Campbell Bay and had got infection recently and when reported breathing problems, he was brought to Sainik Saray of Campbell Bay and given Oxygen Support yesterday night.

Today morning he reportedly complained more breathing problems after which the doctors consulted the doctors of Port Blair and after efforts of AC Great Nicobar Helicopter support reached for the patient.

The patient along with his wife and a medical staff were brought to Port Blair this evening and later the patient was admitted in Isolation Ward of G B Pant Hospital. 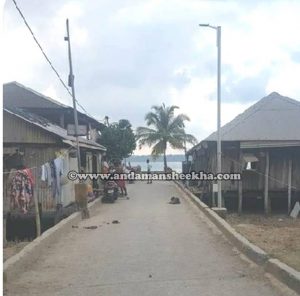 Nancowry, August 19: The power blackout since 11th August 2020 at the Champin village of Nancowry Island which remains unattended by the authorities to date, has finally forced the residents of the village to sit on a strike.

In a letter addressed to the Assistant Commissioner, Nancowry Island, the 1st Headman of Champin Village has stated that all the public of Champin, Balu Basti and Tapong Village will sit on a strike from 21st August 2020.

Meanwhile, the power blackout problem was highlighted to the District Commissioner, Car Nicobar by the Nicobar Chamber of Commerce via twitter message to which the DC replied that matter has already been taken up with the department.

Stating the reason for the delay in attending the problem, the DC informed that due to rough weather, the Generator set for replacement from Kamorta couldn’t be done.

“Tomorrow the same will be done and a technician will also be arriving from Port Blair for repairing the Genset in Champin,” the DC assured in his twitter handle.