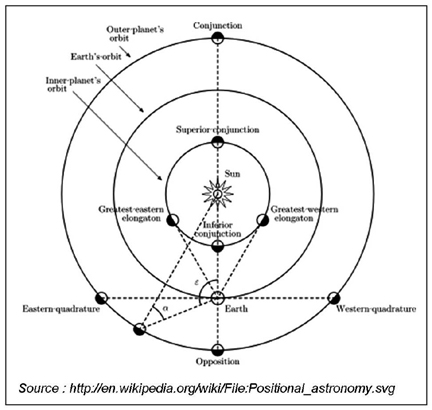 As available in Microsoft® Encarta® Dictionary, “opposition” is “hostile attitude” or “action” : a disapproving attitude toward something and a wish to prevent it, or action taken to show disapproval of and prevent something. This definition of the word “opposition” however translates into a dreaded fear in political circles causing many a heads to roll. But when it comes to planet Mars “opposition” is considered a celestial treat that the scientific community, especially those in astronomy desires to be a part of.

In positional astronomy “opposition” means, a superior planet during its orbital journey falls opposite to the sun in a line passing through the planet (inferior) on which the observer is situated. For an Earth bound observer, planets outside Earths orbit namely Mars, Jupiter, Saturn, Uranus, and Neptune are termed “superior” planets whereas those orbiting on the inside namely Mercury and Venus are referred to as “inferior” planets. 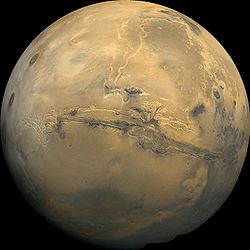 One such “opposition” would befall on 3rd March 2012 at 20h 10m UT (4th March at 01.40am IST) wherein Mars would lie in a line, 1800 opposite to Sun, when viewed from Earth. As such the face of Mars visible from Earth would be fully illuminated making it appear brighter, bigger and easier to locate in the sky. Also during opposition Mars would rise around sunset (in the eastern sky) and set around sunrise rendering it visible all through the night for about a week. Hence if you come across someone gazing the night sky on 4th March, Sunday, it’s no reason to perplex; he could just be the one among thousands, curiously gazing the most “mysterious” and “explored” planet – Mars, which happens to be in opposition starting that date.

Placed fourth from the Sun, Mars is a terrestrial planet having approx half the diameter of Earth with Phobos and Deimos as its moons. The planet is named after the Roman god of war and appears reddish-orange owing to presence of iron oxide on its surface, hence also called the Red Planet.

Mars posses quite a few feature semblance of Earth, such as four seasons, changing weather, polar caps, storm clouds, dusty winds, and a variety of surface features that change color, size and appear to shift position over time. Such striking earth like feature confers Mars # 1 position in the list where possibility of life outside Earth is deemed possible.

Olympus Mons, the volcanic mountain located in Mars’ western hemisphere is the tallest known mountain (22 km) in the Solar System; almost three times as tall as Mount Everest (8.8 km). The Valles Marineris system of canyons along the equator which is more than 4,000 km long, 200 km wide and up to 7 km deep is one of the largest canyons of the Solar System, surpassed only by the rift valleys of Earth. The Borealis basin or the North Polar Basin believed to be formed by an impact so large that it produced the Tharsis bulge along its rim, having axes of length 10,600 km and 8,500 km is the largest impact crater in the Solar System; approximately four times the diameter of the next largest craters, the South Pole–Aitken basin on Earth’s Moon and Hellas Planitia on the southern hemisphere of Mars.

Apart from these, other Maritan feature having semblance of Earth include length of its sidereal day (Mars = 24 hr 37 min whereas Earth = 24 hr) and the axial tilt (Mars = 25° whereas Earth = 23.5°). However the time taken by Mars to complete one revolution around the Sun is about two Earth years long (687 Earth days). This difference in the orbital period of Earth and Mars results in Earth overtaking Mars once in every 26 months. During such a crossover, Mars lags behind Earth and appears to move backwards in a looping motion (retrograde) with respect to background stars. Such an orbital rendezvous resulting in Mars falling in a line, 1800 opposite to Sun for a brief period is called “opposition” when viewed from Earth.

Further since the orbit of Mars and Earth are ellipses and inclined with Sun offset from the centre, distance between the two planets at an opposition can be anything ranging from 56 to 100 million km with an apparent magnitude varying between +1.6 and -3.0. And angular size varies from 3.5 to 25 Arc Seconds.

This time Mars would reach opposition on 3rd March, 2012 at 20h 10m UT (4th March at 01.40 am, IST) in the constellation Leo. Two days later on 4th March, Mars will have its closest approach to Earth during this apparition (100 million km). This is close to the least close, or largest value, as Mars will be considerably close to the aphelion of its orbit.

To the naked eye, Mars will appear as a pale orange bright star (maximum size being 14 arc seconds) below the Moon (about 130 times that of mars) on the eastern horizon after the evening twilight. Thereafter as each night goes by, Mars would appear higher and higher in the sky and would slowly grow dimmer and mingle with other heavenly bodies as Earth moves away, leaving Mars lagging in its orbit.

Opposition provides unique opportunity to launch scientific studies, specific probes, sending spacecraft etc with the view to gather crucial data on the planet. Currently Mars is host to three orbiting spacecrafts namely Mars Odyssey, Mars Express, and the Mars Reconnaissance Orbiter. On the surface are the Mars Exploration Rover Opportunity and its recently decommissioned twin, Spirit, along with several other inert Landers and Rovers. Observations by NASA’s now-defunct Mars Global Surveyor show evidence that parts of the southern polar ice cap have been receding. Observations by the Mars Reconnaissance Orbiter revealed possible flowing water during the warmest months. Though direct evidence of life is yet to be found, the data sets gathered through various Mars probes complement the idea that Mars may have had conditions conducive to support life in the past.

Though this opposition will not be as spectacular as the one witnessed on 27th August, 2003 when the distance between Mars and Earth shrunk to 56 million km, but hope this “Opposition of Mars” would bring scientists further closer to the elusive breakthrough. Whereas a casual observer like me would just look up at the sky and wonder! 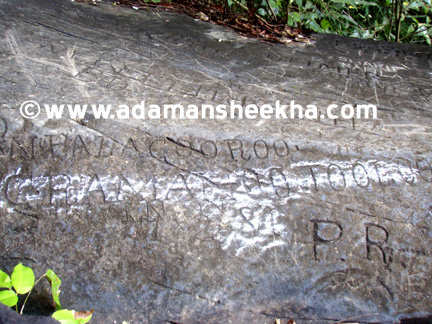 Giant trees rose on either side of the narrow trial as it snaked through the tropical forest forming a thick canopy overhead. Huge lianas hung down from their branches like pythons. A few rays of sunlight filtered through the dense foliage. There was a chill in the air although it was midday. Everything was eerily silent except for an occasional shrill call of a parrot or the drumming of a woodpecker. The trial seemed endless as it dipped and rose and again dipped into the evergreen forest.

I have trekked up Mount Harriet many times. Once it was to escort a British High Commissioner to India, who wanted to witness the sunset from the peak, just like Lord Mayo, the Viceroy of India, who was killed by a convict on his way down. A notice announced that a trial led down to ‘Kala Pathar’ or Black Rock. Another went down to Madhuban, the place where the Forest Department elephants went to school. But I never went beyond the bungalow at the top.

When Prof. Clare Anderson, Professor of History in the University of Leicester told me that she was looking for some ‘graffiti’ on Kala Pathar I was not interested. How could some graffiti, written more than a hundred years ago, be still there on a rock! But that would be a nice trek, and an opportunity to watch some rare birds. We set out in the morning. Along came Zubaire Ahmed, my journalist friend. He too had not heard of Kala Pathar.

An excited Prof. Clare blazed the trial. Behind her walked Zubaire, stick in hand. I brought up the rear. What appeared an easy trek in the beginning became tedious when we started climbing a steep rise. The loneliness made it more arduous. The frail professor walked with an easy step, but my bad knee was giving me trouble, and I started doubting the wisdom of trekking all the way to a black rock and look for some graffiti mentioned in the letter of pastor to his daughter Prof Clare had dug out in the British Library.

Prof Clare has found in some manuscripts in the British Library a letter written by one Rev. Warneford to his daughter Maud on 4th May 1876. It read, “Went to the ‘rock’ at Mt. Harriet and cut out your name MAUD about 4 inches long near Ms Stewart’s. Reggie’s is also there and the mark of the bullet he fired from my rifle into the tree at the side of the rock”. It was clear that many British families stayed in the bungalows on the top of Mt. Harriet during the hot season. They would explore the forest and shoot pigeons. But a visit to the ‘Rock’ to cut one’s name has not been mentioned anywhere in the records or the books I have read.

After what seemed an eternity a noisy group of trekkers overtook us. They were also going to Kala Pathar for a picnic. It was great relief to have some company. At least the rock was there, if not the graffiti. Prof Clare increased her pace as she sensed we were approaching the rock. A sudden shout announced that she had found what she was looking for. “ I found it! – the graffiti! – its there!”, an excited Clare said. When I reached the rock a little later I couldn’t believe my eyes. In front of us, was a huge black rock, worn smooth by the weather, but with not just WARNEFORD but many more names cut into its surface.

The most prominent name was ‘WARNEFORD’, with the year 1876 below it. A little above it, in a corner was inscribed ‘F. BARTON’. On the other side of the rock I found two names, ‘N. BALAGOOROO’ and ‘C. RAMANOOJOOLOO’ obviously south Indian. Beyond them, where the rock face fell away into a deep chasm, was carved HMS RIFLEMAN, and a date, 1869. Other inscriptions that didn’t make any sense to me were the initial K.C.C. with the date 2-3-1885 and some Urdu words. There might be more graffiti on the other side but it was too risky,

and the more recent graffiti, in paint and chalk, covered the old ones. It appeared that part of the rock might have broken off and fallen into the chasm below. The picnic party spoke of the Japanese using the rock to push people to their death during their occupation of the islands.

Just as we turned to go I noticed another set of initials cut deep into the rock. They were large, very neatly carved, and seemed familiar. ‘F R de W’ rang a bell. Both Prof Clare and I blurted out at the same time the full name of the person, Lt. F. R. de Wolski of the Royal Engineers, the officiating Executive Engineer of the settlement. I was suddenly reminded of the big fight that took place between Lt. Wolski and Capt. W.B. Birch, one of the Assistant Superintendents. The epic war of demi-official letters between the two became the talk of the town in the Port Blair of 1876.

In the stultified environment of the budding penal colony both men jockeyed for position. Birch won; Wolski was suspended for insubordination and transferred. That was a long story. But what made Wolski come and carve his name into Kala Pathar? I wondered. We couldn’t find Maud’s name. Balagooroo and Ramanoojooloo must have been some kind of petty officers. HMS Rifleman was the guard ship at Port Blair. Did the crew of the ship come up for a picnic? Several questions rose in our minds as we started walking back. Perhaps another visit would reveal some more names. But the thought of going up again through the leech-infested forest was not really exciting, at least for the present.