Mayabunder, Feb 11: In a case of aggravated penetrative sexual assault of an innocent minor minor girl of just seven years by the wrongdoers, in 2019, the matter was brought before the temple of justice for redress by the mother of the victim girl.
The case was started on 07th July, 2019 at Police Station Diglipur on the basis of complaint lodged by the mother of victim girl.
The prosecution has sufficiently proved that the accused persons committed the offence of aggravated sexual assault under section 10 of POCSO Act.
Accordingly, Shri. Jimut Bahan Biswas, Additional Sessions Judge -cum- Special Judge under POCSO Act, North & Middle Andaman, Mayabunder has convicted the accused persons namely Shankar Biswas and Ajit Kumar Mondal, both are residents of Khudirampur under PS Diglipur and sentenced to undergo rigorous imprisonment for five years each for the offence punishable under section 10 of POCSO Act and also to pay fine of Rs.50,000/ (rupees fifty thousand) each, in default of payment which they will have to undergo rigorous imprisonment for three months more. For the rehabilitation of victim girl, an amount of Rs.4,00,000/- (rupees four lakhs) has been awarded as compensation as per provision u/sec. 357A read with section 33 (8) of POCSO Act which will be paid by the Government from Government fund as provided under 7(4) of POCSO rule.
The prosecution case was conducted by Shri. Keshab Ch. Mondal, Learned Special Public Prosecutor (POCSO Act).

Vikramaditya
Port Blair, Feb 10: In yet another strike against Ganja in Andaman and Nicobar Islands, the CCS team of A & N Police has arrested one person from Shaheed Dweep and seized nearly 1.2 KG of Ganja from his possession. The Ganja reportedly reached Shaheed Dweep by India Post Parcel. 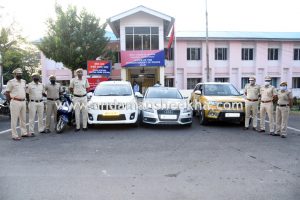 Port Blair, Feb 07: In a first-of-a-its-kind case in the Islands, A&N Police has frozen immovable property, bank accounts and seized 04 vehicles of drug peddler Mohammed Sultan R/o Garacharama, a release issued by SP CID said here today.
“He was arrested on 22/10/2020 by Police Station Central Crime Station with 13.320 Kgs of Ganja. Md. Sultan has amassed huge wealth through his career of crime. During investigation by PS CCS the details of his illegally acquired properties were traced and identified. The investigation resulted in a Seizing/Freezing Order by the Station House Officer, PS as regards to a land piece at Chouldhari, four vehicles and 4 bank accounts having significant deposits. Mohammed Sultan has been involved in 11 cases of drugs and other cases since 2008,” the release added.
According to the release, the order was confirmed by the Competent Authority and Administrator, Department of Revenue, Ministry of Finance, Govt. of India, resulting in freezing of his immovable property and seizure of his movable properties including four nos. of vehicles viz. a super luxury Audi A4, Maruti Vitara Brezza, Maruti Ertiga VDI and Suzuki Access Moped. The seizure and investigation was carried out under Sh. Jagdev Singh Yadav, DANIPS, Dy.SP (CID).
“Andaman & Nicobar Police is committed to eradicate the menace of drugs from the Islands and to take strict legal action against drug peddlers including seizure and forfeiture of their illegitimate gains. The general public is requested to share any information related to drugs in the Island on the following numbers:233307, 232586, 100, & 9474290250 and/or through email at: spcid.and@nic.in The informer will be suitably rewarded and his/her identity will be kept secret,” the release added.

Port Blair, Feb 08: On 06/02/2021, an information was received at PS Swaraj Dweep regarding sighting of an unidentified dead body at Vijay Nagar beach, Swaraj Dweep. Upon this, an investigation into the death was launched and the deceased was identified as Saw Kevin S/o. Saw Francis (30) yrs, who worked as a boat operator at Dive India.
As the circumstances surrounding the death appeared suspicious, a special team consisting of SI P.R. Pradeep, SI P. C. Manickam, SI B. Santosh Kumar, HC/Sanjit Surin, PC/Chanden Sen, PC/499 Aslam & PC/T. Shinivasan was formed under the leadership of SI. Vinit Kumar Maurya, SHO, PS Swaraj Dweep to crack the blind case. The special team started working on different angles, interrogated more than 50 persons, collected information from local sources, checked the CCTV footage of all the places where the deceased might have visited last night. Finally one suspect namely Chiranjit Sarkar @ Golu was zeroed upon and was nabbed.
After sustained interrogation, the suspect namely Chiranjit Sarkar @ Golu confessed to his involvement in the crime and narrated the entire sequence of the crime. Accordingly, the Unnatural Death enquiry was converted into a murder case vide FIR No. 07/2021 Dated 06/02/2021 U/s 302 IPC against Chiranjit Sarkar @ Golu S/o Shri Paritosh Sarkar (22) yrs R/o Vijay Nagar, Swaraj Dweep and the investigation of the case was taken up by SI Vinit Kumar Maurya, SHO PS Swaraj Dweep. After observing all the codal formalities, the accused was arrested and produced before the Hon’ble Court on 07/02/2021.
The entire operation took place under the supervision of Shri Abhishek Gupta, DANIPS, SDPO Swaraj Dweep and the case was solved within 12 hours of its reporting. The general public is once again requested to share information pertaining to any crime or other illegal activities to police at 100, 112 & 03192-232077. The identity of the informant will be kept secret.

Port Blair, Feb 08: Continuing its zero tolerance against the illegal trade of narcotic drugs in South Andaman District, the team of Police Station Chatham apprehended two drug peddlers and seized a total 1.510 kgs of “Ganja” from them.
On 05/02/2021, acting on a credible information about two persons who might be in possession of contraband (Ganja) and will try to sell it to customers near new Vehicle Ferry Jetty, Chatham, a team was constituted comprising SI Shubham Ghosh, HC/Ajit Pandey, PC/N. C. Roy, PC/Bipul Halder, PC/Rakesh Narayan, PC/Rosha and HG(R)/C. Selva Raj under SI Gaurav Banerjee, SHO PS Chatham sent to the spot. The team then successfully arrested two persons namely (1) Naveen Ilavarsan S/o Late. Nedunchezhiyan (25) Yrs and (2) Mathiraja S/o Late Muthuramalingam (23) Yrs, both R/o Anarkali and recovered 1.205 Kgs of Ganja from their possession. On their disclosure, some more (305 gms) of the contraband was recovered from their boat, M.L. Seven Star, which they had stationed at Junglighat Jetty. A case under NDPS Act, 1985 was registered against the two accused persons and investigation of the case is under progress.
The entire raid took place under the supervision of Shri Narra Chaitanya, IPS, SDPO South Andaman. The general public is once again requested to share information pertaining to any crime or other illegal activities to police at 112, 03192-232100 & 03192-233077. The identity of the informant will be kept secret.

John Wilbert
Port Blair, Feb 03: The Andaman and Nicobar Police has arrested a 26 year old youth of Mayabunder region under POCSO Act.
As per details, recently a 16 year old, minor girl reached Mayabunder Hospital for treatment and during the treatment the Doctor found that the girl is pregnant. Soon the matter was informed to Police. On inquiry the accused was identified and he was arrested.

John Wilbert
Port Blair, Feb 01: A POCSO case was registered against a resident of Makachua village of Great Nicobar. As per details a minor girl with her infant baby had come to PHC Campbell Bay for treatment, when doctors detected that mother of the baby is a minor girl, nearly 14 year old.
On this the matter was reported to police and soon the accused, 33 years was arrested. The minor had girl reportedly delivered the baby at her home.

Vikramaditya
Port Blair, Jan 15: Just three days back the Director General of Police of Andaman and Nicobar Islands had told media persons that curbing illegal sale of drugs & liquors are high on his agenda and today the Police Station CCS seized more than 500 bottles of illicit liquor and arrested two persons.
As the DGP has expressed firm commitment against drugs and illicit liquors things have started to change in Andaman and such massive haul of liquor is an example.

Vikramaditya
Port Blair, Jan 13: Andaman Sheekha daily had reported on 13 January 2021 edition that Andaman and Nicobar police had cracked the murder case of Makka Pahad woman and also reported that there is possibility of one more arrest.
Now it has been learnt that the police has made the second arrest in this case.
The swift action by police to crack this case of crime against woman has been highly appreciated by public.
As per a press release issued by police today, Mrs. Sangeeta Bara, age 26 years, a resident of Makka Pahad was reported missing by her husband Mr. Maryanus Minj on 05/01/2021. On 06/01/2021 her body was found in a pit near coconut plantation at Makka Pahad. As there were injuries on her body, a case of murder was registered at PS Pahargaon and investigations taken up.
During interrogations it was revealed that Smti. Sangeeta Bara was murdered by her relatives, Jibren Minj, elder brother of her husband and his wife, Reshma Lakra. Both the accused have been arrested on 12/01/2021.
The accused were produced before the CJM Court today and the court has remanded them to police custody for 05 days. The interrogation team which has solved the murder case consisted of Shri Narra Chaitanya, IPS, SDPO (SA), Shri Kalaivanan, IPS, SDPO (Bambooflat), Shri Manny Bhushan Singh, IPS(P), Inspector Jagdishwar Rao (SHO Pahargaon), Inspector Rahul (SHO Aberdeen) and Sub Inspector Elangovan (SHO Bambooflat) under the supervision of Shri Ravi Kumar Singh, IPS, Superintendent of Police, South Andaman District.

Vikramaditya
Port Blair, Jan 12: Giving a clear message to the society about zero tolerance for crime against woman, the Andaman and Nicobar Police has finally cracked the blind murder case of Calicut.
As per details body of a missing woman (name withheld) of Calicut region was found on 6th January 2021 morning near her house by her relatives, in suspicious circumstances. The victim was reportedly missing since 5th January 2021 afternoon.
Following this a case of murder was registered at PS Aberdeen on 6th January 2021.
Sources said that the Andaman and Nicobar Police has arrested the brother in law of the victim, as the prime accused in this case and there is a possibility of one more arrest.
As this case was completely blind and there were hardly any direct evidence, the Andaman and Nicobar Police had formed multiple teams and investigated the case from different directions. Infact four IPS officers were directly overseeing the entire case to make sure that the victim and her family get justice and it sends a right message in society.
The motive behind the murder is still not clear, however, it is learnt that the police department will release a detailed statement soon.
Sources said that after sustained investigation and detailed interrogation the police department got success last night. The accused, will be produced to court tomorrow, it is learnt.